He was born on November 2, 2003, in the United States. He is also a member of DreamSMP on the Minecraft server.

Ranboo lives in the San Francisco Bay Area and was confirmed by one of his top Discord admins and Twitch moderators after posting a photo of San Francisco’s Twitch HQ. He graduated from high school on June 3, 2021.

On the camera, fans can see that Ranboo always wears black and white split masks, sunglasses, and previously gloves. He does this as part of his online personality and also to protect his privacy.

As one of Dream SMP Fanart most popular creators, fans are looking for ways to show their love for him. And they draw a lot of Ranboo Fanart. Few fans spend hours creating a single fan art and polishing every detail. The result is a fine work of Ranboo art.

And for Ranboo fans, this post introduces the top 8 Amazing Ranboo Fanart Wallpaper and praises their artists.

This Enderwalk Ranboo picture was posted on Twitter by mytrashyskills. Looking at it, one could feel as if Ranboo was being taken aback by something. This Ranboo Fanart Wallpaper is also a beautiful work of art. It’s a perfect picture of Ranboo’s Minecraft looks and personality.

This super ranboo image was posted on DeviantArt by sweetzka. No one can deny the cute and adorable of this fan art. It was a delicate artwork drawn by the love of Ranboo true fans. With all the special effects art programs available today, there is something sentimental about hand-drawn-looking images.

Posted by SveNat on Devianart, this amazing Ranboo Fanart captures Ranboo’s true spirit and personality. From his hair, his two-color eyes, and even his dashing suit. But Ranboo’s face in this picture is pretty dumb like he’s just being oblivious to something.

This ranboo drawing from Dubak. Yeah, it’s a really cute and fun Ranboo Fanart Wallpaper, every fan of Ranboo and Tubbo will love this. The picture of Ranboo hugging Tubbo very lovingly shows the close friendship of the two guys. Ranboo’s arm wrapped around Tubbo from behind, it feels so warm, isn’t it, so jealous? 🙂

Cool fan art Technoblade And Ranboo Fanart was posted on reddit.com by u / O1iver_6013. The pop-out animation and the clean look give it a cute feel. By mastering the essence of drawing, the author can create the perfect Ranboo fanart. In the photo, Ranboo is wearing a vest and looks very cool with a crown, an iconic face mask, and glasses.

This grateful ranboo fanart was posted by akyra on Twitter.

Rainbow Dream Smp Fanart by sokoistrying, this fanart comes in good coloring and strokes also. These pictures of ranboo fanart depict Ranboo as a demon, quite scary looking but very cool.

Ranboo Back in the UK

This art was posted on Twitter by ChimKin. It is different from all the pictures above because it is quite simple, in the picture is Ranboo in real life. He is no different wearing a shirt and tie, not wearing a black and white mask. It’s just the Ranboo of everyday life, so cute, isn’t it?

This fanart was posted by Shekai on facebook. This is probably a really cool ranboo fanart and it really shows the spirit of ranboo, it’s great. 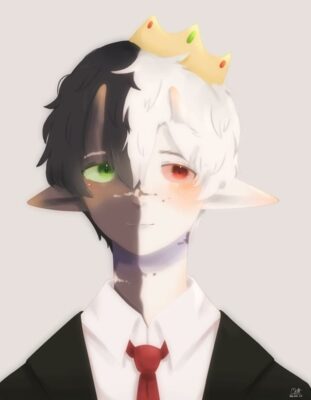 This fanart was posted by ค ค่า ใส่ on Facebook. It’s a cute ranboo fanart, it seems like Ranboo looks like a small and gentle guy in this picture.

Posted by Kice on Twitter, this amazing fan art captures Ranboo’s true spirit and personality. Everything from his hair to his facial expressions is accurately depicted. The Yellow Crown is an outstanding fan art inspired by Minecraft skins that perfectly match the aesthetics of the image.

Thiss kinda cute Ranboo fanart by TusalTulip and she post it on Facebook. It’s so cute isn’t it, if you’re a fan of Ranboo you’ll definitely love it from the moment you see it.

Wow, this Ranboo fanart is really beautiful and it comes from NanumiARTS on Devianart. I love how this artist can paint such a beautiful picture.

Yes, he looks like a ninja in other words this artist drew him dressed as a ninja. With a sword (I think) he looks cool.

Fanart Of Ranboo by LeafyTobi

I found it on Facebook, oh i remember. This artist drew the scene when Ranboo Livestream, pulled down his sunglasses. Oh my gosh, that’s great!!!

This Ranboo Fanart is so real right!!

Ranboo looks like he’s drunk. This fanart is really cute.

Ranboo looks like a little rabbit eating carrots. But he’s actually eating a piece of bread, isn’t it cute?

Wow, Ranboo looks like a demon. With the lightsaber from Star Wars, this Ranboo Fanart looks so cool!!!

This 3 fanart belongs to 엘리, this artist is so talent right!! Her art is quite beautiful!!!

1 year for Ranboo Fanart by sm0key_stxrrs

“Here’s to more happy years of content from our enderboy, can’t wait to see what he does this year 🙂 ❤️💚👑”- sm0key_stxrrs said

Ranboo Fanart Death by a explosion

The artist wanted to symbolize the death of c!ranboo but also the impact it had on c!Tubbo, he remembered his own death.

Hope you can find your favorite for yourself. To search for Ranboo Merch, please visit our store and look for other items.

To read more interesting blogs about Ranboo, please continue to visit our website. We will send you the latest information on a regular basis.